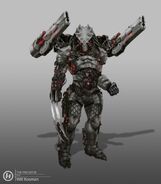 Hadah is the predator that took in Alexander after his real parents were killed.