Template:Infobox character An Aquamorph, also referred to as a Lake Alien and Aqua Alien, is an alleged species of Xenomorph that generally consists of Soldier and Drone ranks of the hive. Only one hive of the species is known to exist allegedly in a small lake in the state of New Hampshire, hence their nickname of Lake Aliens. The hive has one Queen including a nest of eggs which is located in the very deepest part of the lake, being about 20 ft underwater.

It is unknown how the species arrived on the planet Earth or adapted to breathing underwater. Although, the normal species of Xenomorph has been known to breath on both land and water, while an Aquamorph can only breath on land for an estimated 48 hours before dying.

The species of Aquamorphs has only one known hive which is located allegedly in a small lake in the state of New Hampshire. There is a Queen that has laid a nest of eggs in the center of the hive that spreads around the lake. When the Facehuggers hatch from their eggs, they hide underneath the sand and hide themselves. The Facehuggers have been known to hide beneath the sand of the lake's beach and attack unsuspecting swimmers. A Chestburster will eventually erupt from the chest of a Facehugger host and head for the lake soon after hatching and molt into a mature soldier or drone to act as one of the hive protectors of the Queen.

The species has many advantages of living underwater and their most common motive of taking humans to bring to the hive is their habit of knocking over sailboats until they eventually fall over backwards. The Aquamorphs then take the humans back to the hive where they are impregnated by Facehuggers with Chestbursters. The species has only been known to use their violent techniques of taking humans to the hive in their soldier or drone stage while in the Facehugger stage, they simply hide underneath the sand.

The species does, however, have one weakness: due to spending their lives underwater, the Aquamorphs can only breath on land for an estimated 48 hours before needed to return to the lake to breath underwater. It has been rumored that if an Aquamorph is to thrive on land for longer than this, it will dry out and lose its slime-like substance which results in the creature eventually dying.

The Soldiers and Drones of the species serve the same purpose of any other Xenomorph hive. The Soldiers and Drones guard the Queen's nest which is located in the middle of the hive. They are spawned from humans who have been impregnated by Facehuggers. The Drones of the species are very similar to that of the Genetic Xenomorphs spawned from the Queen cloned along with Ellen Ripley on board the USM Auriga, only the Drones of the Aquamorph species resemble more of the Xenomorphs seen in the crossover film Alien vs. Predator.

The Queen of the species is said to never leave the hive located in the middle of the lake and is always with her nest guarding the eggs that she has laid along with her guards, the Soldiers and Drones that have been spawned from human attendants of the summer camp. 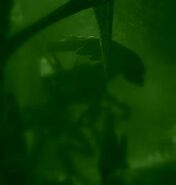 The hoax picture of the Aquamorph Queen.
Add a photo to this gallery
Retrieved from "https://alienfanon.fandom.com/wiki/Aquamorph?oldid=10283"
Community content is available under CC-BY-SA unless otherwise noted.