This article was written by Johnnthemaster. Please do not edit this fiction without the writer's permisson

D'ios (or more commonly known as the Golden blade pretador) is a Predator fan character created by Johnnthmaster and is the main protagonists in the upcoming AVP fan fiction, Aliens vs Predator: Outbreak. He is an Supreme Yautja and is the leader of the Supreme Clan and an exceptionally skilled Xenomorph Hunter and leader hence his "Lord" Bio Mask.

Rank: leader of the X Clan

The Predator possesses superhuman strength, resistance, reflexes, and stamina. His reptilian-like biology makes him agile and able of performing high jumps and acrobatics, such as jumping from buildings. The Predator is an alien humanoid with advanced technology and a penchant for hunting difficult game. With interstellar travel capability, multi-spectrum vision enhancement, and a light-bending armor suit with equally advanced weaponry, the Predator is able to travel anywhere, hunt anything, and usually succeed. D'ios is skilled in all Yautja combat arts and weaponry. 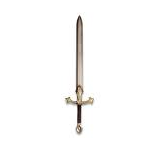