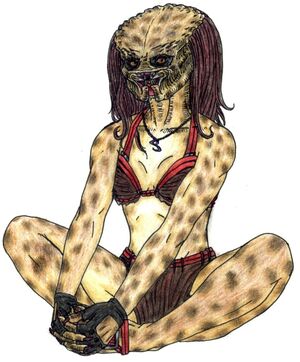 Raja is a female Yautja. She is the first of her species to mate with a non-Yautja, a human by the name of Henry Prior.

Her face is just like that of any other female Yautja, with four-way mandibles, a flat skull, and braided hair.

Her body, however, is small and muscular, more similar to that of a female human. Her arms are scrawny, and her legs are short and not particularly strong. She is only five feet tall.

Raja carries a small spear, although she sometimes has trouble lifting it. She also owns a cloaking device.

Raja is torn between her innate viciousness and her love for Henry Prior. She seeks the blood and death of her enemies, but she is kind and gentle towards those who have never tried to hurt her.

When she was born, Raja was much like any other Yautja. However, when she came of age, it became apparent that she was a runt. She was ridiculed, and she soon found that the only males interested in her were those who could not gain any others; the cowards and weaklings. Eventually, all of this proved too much for her to bear. She hijacked a vessel, and left Yautja Prime. She then began to wander the universe, desperate to find anyone who might care for her. It was during this period that she met Henry Prior, and fell in love with him. They were married soon afterwards.